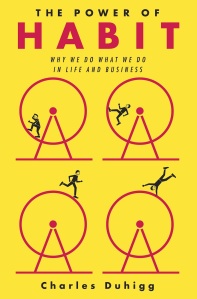 So I have been reading The Power of Habit: Why We Do What We Do in Life and in Business by Charles Duhigg on my Kindle.. It is a fascinating read. I mean really, really good. For so long I only read fiction books but in the last couple of years, I have switched over to non-fiction and I’m learning a lot. First, he talks about the habits of individuals, then the habits of successful organizations, and last the habits of societies. I’m trying to read slower so the book doesn’t end too soon!

One of the most interesting parts of the book talks about key habits. Duhigg tells us that if we change one habit, there is a cascade effect and many other habits will change as well. He says that key habits are different for everyone but there is one that many people share – exercise. He says that for many people changing the exercise habit means a change in diet, organization, communication, and education. After reading that, I decided it was time to stop babying my ankle and get back into running.

This morning, I woke up and announced I was going running. Now, it must be said, I don’t run with others. I never have and I never will. It’s a personal thing. I don’t want to be self-conscious about how I look or if I’m slow or if my breathing is too loud or whatever. So when my host brother told me that he would go with me and I could run in the woods, I was less than excited. He said that he would ride his bike and I could run. He also told me that his bike path was different than my running path. I acquiesced.

Getting to the path took 15 minutes UPHILL. I was already cranky and tired by the time we got to the running path. But the run was actually quite beautiful. The woods are filled with eucalyptus trees and it smelled so pretty! But then it started to hail. And then it started to rain ridiculously hard. André and I waited under the roof of a little junkyard waiting for the rain to slow and then we headed home. However, because it was a flash flood type of situation, there were HUGE puddles along the road and when buses whizzed by us, the puddle water and little bits of gravel were flung onto us. I came home drenched, dirty, and cold.

Not a great start but a start nonetheless. This needs to become a habit.

2 thoughts on “Here I go again…not really on my own.”